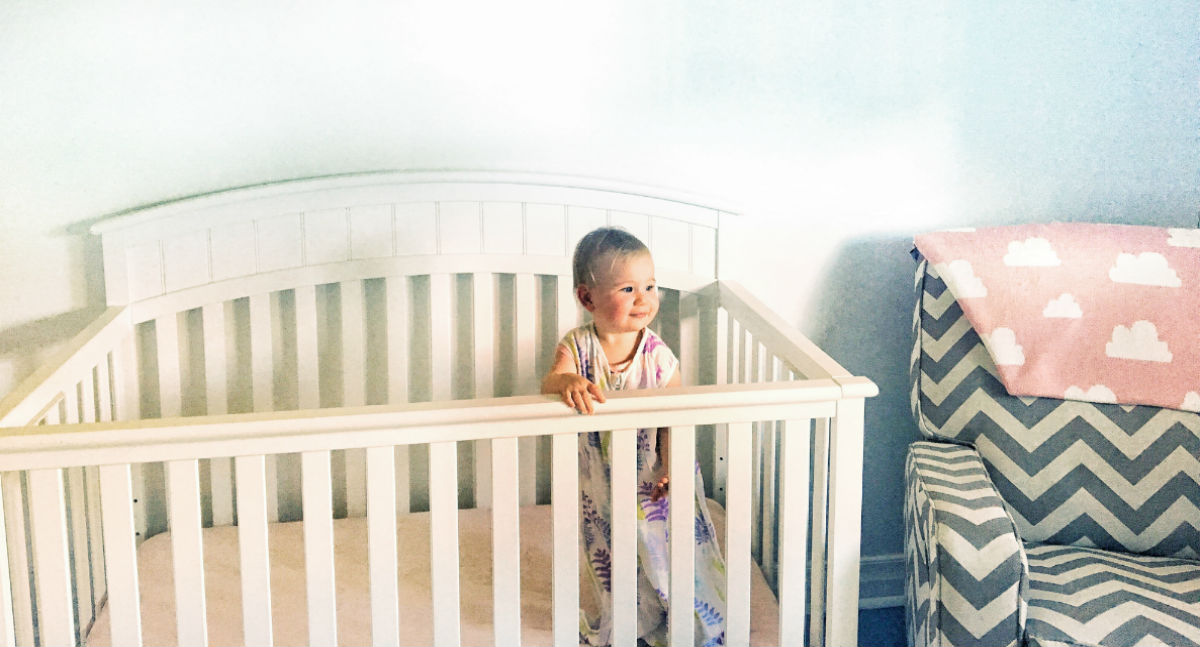 Ah naptime…the bane of my existence as a mom. Too much, too little, too early, too late…it’s a tricky negotiation that leaves me anxiety-ridden most of the time. Nothing has proved more complicated than transitioning Charlotte from two naps to one. So many of you have asked for Charlotte’s nap schedule, so here’s the breakdown!

The recommendation is to keep trying for 2 naps a day until baby is 15 months, but my child gave me all the signs that she was ready to try to switch to 1. I asked friends, sleep consultants and the internet and most moms conceeded that they just followed their child’s lead. And if she was showing more than a few signs that she was rejecting the morning nap, to try giving it up and see what happened.

There are days where napping doesn’t go as planned. Charlotte is cutting 2 molars and 2 canines at the same time, so her napping (and night sleep) has been all over the place! When she wakes up at 5:30am, I will put her down for a nap at 9am, but I’ll cap it at an hour. And even then, I don’t do it every day because the extra nap affects her night sleep. She’ll wake up in the middle of the night and it’ll take hours for her to fall back asleep. Not good!

By 14 months, she’s doing one 2-3 hour nap, 5 days out of the week. This makes me so happy because she’s starting daycare at the end of August and her schedule mirrors the daycare’s. I’m hoping it’ll allow for an easier transition for all once she starts. I LOVE the 1-nap-a-day schedule! It gave us so much more freedom in our day, and guaranteed that she’d sleep for at least 2 hours. This was WAY better than staring endlessly at the baby monitor, praying that she’d just lie down and relax. And having big chunks of time to myself is also enormously helpful to my self-care. I can eat, nap, blog, do a load of laundry, even read, while she sleeps. It’s made the summer very enjoyable.

REAL TALK: When did your child transition to 1-nap-a-day? Was it easy or difficult to get them on a new schedule? Let me know in the comments below!

Today’s the day! Super proud to unveil the project I’ve been working on for months 😍As many of you know, I work in PR/Partnerships at @kana.goods so nothing thrills me more than being able to finally share our news with you all. @kana.goods has just launched the ultimate cast-iron cookware bundle on @kickstarter. For a limited time only, you can get your hands on our best-selling 3-Piece-Set at 40% off.
Hey, health update 🏃‍♀️ For the last 12 weeks, I’ve been working with a health coach (@eko.coaching - highly recommend her, she is a queen 👑) and have been working on developing new healthy habits that will take me forward in my life. I went from being totally inactive to walking twice a week. I used to mindlessly scroll IG for hours past bedtime, and now have a bedtime routine and timeframe to relax, read and get to bed. I eat snacks off a plate, instead of from the bag. I drink 2 cups of water in the morning with my coffee. I have protein at breakfast and 2/3 meals have vegetables. I have a timeframe to eat my meals and snacks and I don’t feel guilty if I truly need a bite of ice cream. These all seem like insignificant changes, but they have helped me start the shift from couch potato to “mover.” During the last 12 weeks, I haven’t lost a pound, or gained one either. Change doesn’t need to be extreme. It doesn’t need to be measured by the number on a scale. It doesn’t need to be documented as a before/after and it doesn’t need to be all or nothing. Simplicity, planning and self-awareness have allowed me to work towards an overall goal of being a healthier person, regardless of the number on a scale, or the size on the label.
I have so many Easter puns, it's not even bunny 🐰💐🐣 So don’t worry, be hoppy and wishing you a basket full of egg-citement this Easter! Without you, I’d go off the peep end 😂
Keeping these girls close to my ❤️ with my new @relleryofficial initial heart necklace. Obviously I customized my heart charms with a C & M so I can always keep my sweeties close. The necklace is 18K gold over sterling and comes with a lifetime tarnish guarantee. @relleryofficial ‘s meaningful pieces are made for your everyday and made to last. The Cuban link chain has been totally Maddie-proof, which says a lot. I love a personalized moment celebrating my girls & want you to customize your own...so get 10% OFF your @relleryofficial order with JENP10!
Happy 18 months to my sweet little Maddie baby. There’s so much to say about you that I don’t even know where to start! You are my feisty girl; a charmer who knows what she wants, when she wants it. Your little laugh is like music and the more words you learn, the more excited I am for our conversations. You think you are part cat and part teenager. Meals and bath time are still your favorite and you run everywhere. You are always helpful, handing me objects you know are mine and like to clean up after everyone. Nothing is sweeter than your kisses, baby girl ❤️ I want to freeze time and keep you little forever.
If you were a little taller and I was a little smaller, we could be twins 👯‍♀️ You guys know I love a matching moment with my girls, so when @shoplazypants reached out to launch their Mommy & Me spring collection, I jumped for joy. These seriously cozy sweatsuits come in 9+ fresh spring colors and are the ultimate in soft, snuggly loungewear.
Loading Comments...
Comment
×
%d bloggers like this: